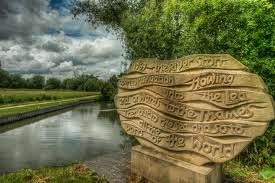 With the Bath to Newbury race now planned and an expected 100km to be covered, I can now relax a little knowing that although it's not a formal race, I will still be running a 100km route unsupported (and that's nothing to be sniffed at). There is no official time; however my Suunto Ambit2 will tell me the time and this will hopefully give me confidence when entering an official 100km race.

So with that sorted I decided to turn my attention to running a shorter (but formal) race. I've chosen the Stort30, which is a very pretty out and back 30 miles (15 each way) along the River Stort. It takes place on the 26 October and is mostly grassy trail or graded footpath. I'll be joining Stouty and Jo Amor on the race; it'll be Jo's first ultramarathon and I'm sure she will nail it. It's a fairly flat route and will certainly be a lot easier than my first ultra - the Marlborough Downs Challenge earlier this year.

The race starts at 9am and registration before that, so I'll probably leave home very early. It's approx. a 2 hour drive from my house.

I haven't really thought about a target time - and to be honest I'm not going to set one. I'm just going to run at a comfortable pace but without plodding. The race takes place 3 weeks after the Bath to Newbury ultra run so my legs will be used to running along rivers/canals. I suppose under 5 hours would be nice to get. I ran the Manchester Marathon earlier this year in 4 hours 20 mins, but ended up walking most of the last half due to an injury. So 30 miles under 5 hours is certainly doable.

So there we have it...another race in the calendar and my second ultra run within the month of October. You probably can't tell from reading these words, but I am starting to get excited!

Email ThisBlogThis!Share to TwitterShare to FacebookShare to Pinterest
Labels: Stort30