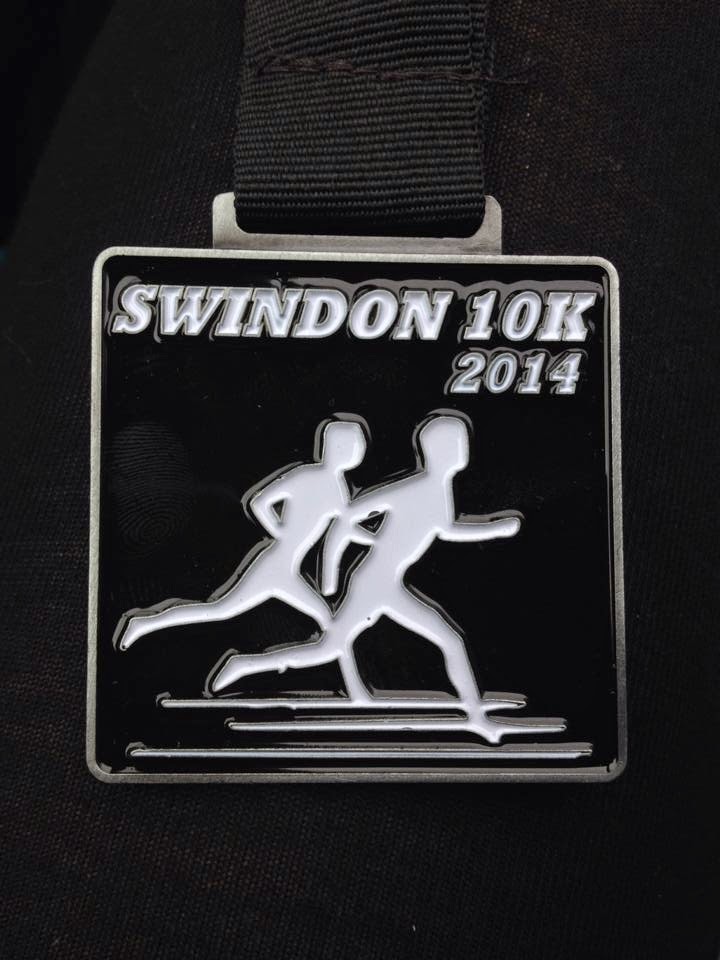 Well, well, well....my first 10k of 2014. A complete contrast to last year when I ran so many; this year has all been about long distances. Nonetheless with my distance running on hold for a while due to the impending birth of our second child, I've decided to focus the last couple of months of the year on getting both my 5k and 10k PB times down.

Prior to the race my official 10k PB was 53.30 which I got at the Wargrave 10k back in June 2013. I've ran 10k races since but mainly hovered around the 55.xx mark. My last official 10k was the ADP Highclere event in September 2013 when I got a very disappointing 57.56. With only November to really get my PB down, I entered my first race - the Swindon 10k.

Some Training - But Not A Lot Really!
Having ran quite a few 10k races last year I knew what it would take physically to go sub-50. I attended 3 parkruns to improve my 5k pace. I wasn't aiming for a parkrun PB; but more just to get the body used to running with pace again. During those weeks I also did some speedy training sessions along with some hill training.

It was then time to throw in some 10k training runs with pace. The first of these was a 10.7km extended Thatcham Loop which I completed in 54.14 and with a 10k split of 50.28. This gave me some confidence to go forward. The following week I ran the same route (a mixture of hills and flat) but aimed for 10k exact. I controlled the pace well and completed it in 48:06. I was very happy with that, especially given some of the hills. It was a huge confidence booster...

Target Time
My main target was to go sub-50 mins; if I could get close to the 48 minute mark then I'd be really happy.

What a busy bunch of runners we Newbury Runners were on this Magic Sunday!

A small contingent headed over to Gosport for the Half Marathon and, in some tough conditions, performed amazingly. Swindon nonetheless was the main event as far as numbers go. An impressive 22 Newbury Runners attended Swindon, and that made the event very special. A number of us travelled by mini bus. Mark Hayes managed to get the school bus and, at some crazy early time, picked everyone up from various locations. I was the last to be picked up and within matter of minutes there were cries for coffee (yes Sue Bennett, we know who you are - lol). So we got as far as Chieveley Service Station before we made our first stop (a stupendously long distance of 3 miles away from where I was picked up). Still it was all good fun and, with coffee in hand, we headed off for the big adventure!

With Jason navigating and Mark driving we somehow managed to arrive at the event without any hiccups. When I say without any hiccups - we arrived at 9:15am and the race didn't start until 11:00am! That allowed plenty of time for us all to bond (take the piss) even more as we huddled in the bus to keep warm.

The first thing we did was go to get our race numbers and timing chips. It was a foggy and reasonably chilly morning. Race numbers got we headed back to the bus to keep warm and have our "Newbury Runners on Tour" pictures taken.

Having sat in the bus for a [long] while it was time to get out and start to warm up. To be honest I was enjoying being in the bus but I nonetheless hauled my backside out and started to warm. I jogged around the car park 3 times (once with Brian) and I have to say it was a little cold. My wrists tend to hurt when it's cold and I was wishing I'd brought gloves with me.

Lately I've been suffering from a little pain in both shins. Not too sure what it is but I've seriously reduced the amount of mileage I've been running during the weeks leading up to this event as a precaution. The warm-up jogs seemed okay but I could feel something - hopefully once I got running proper and the legs warmed up then I'd be okay.

So with everyone stripping off their warm clothes it was time to make a slow move towards the start. It was still misty but at least there wasn't a strong wind. If there is one thing I hate running in, and that is wind.

As we got to the start there was some confusion as to which way we should be running. Whilst others started to discuss this, we Newbury Runners decided to pose for yet more pre-race photos. If there is one thing we like to do, it is pose for photos!

Eventually the race organiser spoke through a megaphone and informed us that where we were standing was not the start (about 100m out) and that when we do start we needed to run around a 400m loop twice before then heading off onto the rest of the course. Ooooh - this was going to be fun: 600 people on a 400m tight loop. I needed to make sure I wasn't trapped at the start.

We shuffled to the start and I chatted to Nicki and a few others. She was aiming for a 50 min PB and I had a feeling she'd get it.

The Race
With the start line approaching the speed people where walking started to increase and before you knew it we were over the timing matt and the race had begun!

As predicted I was starting to get blocked and feared that unless I got to race pace quickly then I'd start to fall behind and struggle to make the time up later in the race (mistake!). I darted in and out of people and at one point even ran on the grass verge to avoid people. Before I knew it I'd completed the initial loops and headed out onto the main section of the course. In essence the rest of the course consisted of approximately 4km loop which you have to run around twice before then running back to the finish (to make up the 10k).


As I headed out on the main section of the course my watch beeped and I'd cleared the first km in 4.35 min/km. That was fast - in fact that was my 5km race pace on a good day. Yes I felt good but my aim was to stay around the 4.45 mark for the first 5km. The next section of the course had a gentle descent, flat, ascent and before I knew it I'd completed the second km with a 4:37 min/km pace. Hmmm - this was still a little too fast, but I felt good.

At the 2.3km mark the route then gradually started to go up hill. It wasn't a steep ascent but it was long. In fact that up hill section continued for approximately 2km. I don't run so well up hills - it messes up my pace and breathing. I just knew I had to be careful about this section on the next lap. I looked at my watch on the 3rd km and I'd done it in 4.39 min/km. I really needed to slow the pace down slightly. The 4th km clocked a 4:43 min/km - this was more like it. I needed to stay around that pace for a while.

There was a water station around the 5km mark but I elected not to stop. The course had gone a little flat at this stage and as I passed the 5km mark some family members from the Newbury Runners told me I was the 2nd Newbury Runner at this stage. That felt good - I'd completed the 5th km with a 4.52 min/km and 23:14 for the first 5km. I knew I was running a little too fast and so figured if I kept at the pace of the 5th km for the remainder of the race then I'd easily come under the 50 minute mark.

It wasn't long however before a couple of Newbury Runners over took me leading up the 6th km. I again completed that 6th km in 4:52 min/km. At 6.2km we then turned left and headed up the 2km gradual climb. I should have slowed down but instead I somehow increased the pace slightly and completed the 7th km with a 4.48 min/km. However I had to stop to catch my breath for a couple of seconds. That's when I heard someone yelling behind me it. It was Jason!!! He was yelling at me not to stop. He passed me and I immediately carried on running but at a much slower pace. That's when Nick also passed me. I could have pushed on quicker but decided not to. I ran a little longer and took another tiny break to catch my breath. I completed the 8th km in a time of 5:07 min/km. Not good - I'd dropped below the 5 min mark for a km for the first time.

The 9th was slower - I again passed the water station and was now suffering slightly because I'd gone out a little too quick when I knew there would be some hills. Had there not been hills I would have easily maintained the pace; but the gradual incline for 2km did affect me. After yet another little stop to catch my breath I completed the 9th km in 5:19 min/km. The final push was now to the finish line - and even that required yet more up hill running. Remember these hills are not really hills - they are gradual ascents. However they were never ending and after a while it does get to the legs. I got through the finish line and completed the final km in 5:05 min/km for a total finish time of 48:08 and a new 10k PB by over 5 minutes!

Assessment
On the whole I have to be happy with the time I achieved. I set out to go sub-50 and would have been even happier with a 48.xx time; and that's exactly what I did. However there is part of me which thinks I could have gone quicker!

The main problem I had was the constant gradual incline and the pace I ran the first 5km in. Had the course been flat then there's a very good chance that I'd be able to continue at that pace; however the constant incline (although not steep) sapped some of my energy and my pace began to drop slightly in the final 2km. That is the complete opposite of what happened on the training run when I maintained a pretty constant pace (despite steeper hills) and got pretty much the same time. In the back of my head I know that if I were to run on a flat course then I should be able to go sub-48 mins.

Next Challenge
No sooner had I finished this race than I signed up for another. I'm now scheduled to run my final race of the year, and probably the last race for at least another 6 months whilst Nicholls Junior No. 2 gets to grips with the world. Next Sunday I am running the "Chilly 10k" at the Castle Combe Race Circuit. It's a flat 3.5 lap route of the track. It will be boring, but as long as there is no wind then I am hopeful of going sub-48 mins.

p.s. Many thanks to Edwina Gudgeon for the photos above - they are great!