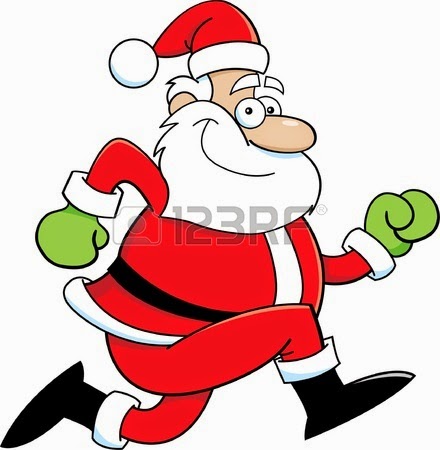 With Christmas fast approaching (in 2 days' time) I thought I'd quickly review the last 12 months in what has been a very interesting, if challenging, year of running.


At the start of the year I set the following goals:


The events I chose for the first two above were:

The 5k PB would be achieved at a parkrun event but it could happen at any point in the year; the 10k PB would have to happen towards the back-end of the year.


I worked with Gobi to develop a 16 week training plan that started in December 2013. It was an intensive training plan that required me to run 5 times per week and involved Progressive Runs, Hill Training, Intervals, Slow Runs, HR-Based Runs and Long Runs. The Wednesday run would be half the distance of the Long Run on the Sunday. Due to my existing fitness and running throughout 2013, my Long Runs would start at 26k and gradually increase by 10% each fortnight.

Injury
As many of you know I suffered during the year with a reoccurring injury to my right foot. After many months of disrupted training and battles with the physio, I finally got an MRI scan in the NHS. The results where quite interesting:


This injury not only impacted my training but ultimately had an impact on the races I entered in the first half of the year. Running off road seemed to make the problem even worse.


Manchester Marathon
Felt very good for the first 25km then the injury to the foot forced me to run/walk the remainder of the race. Was aiming for a 4 hour marathon and was on target but for the injury. Happy to have completed my first marathon given the lack of training and injury, but a little frustrated because without the injury I could have done so much more. I have unfinished business with the marathon after this race.

Milton Keynes Marathon
I stupidly entered this race as an immediate reaction to my time at Manchester (lesson learnt the hard way!). Felt good for the first half of the race, and kept with the 4 hour pacer. However like Manchester my foot started to hurt and I decided to pull out rather than forcing myself to continue. A race I should never had entered - take note people!

This was the one race I wanted to run in 2014. My first ultra marathon. I was still carrying the injury but decided at the last moment to run the race. I went with the intention of running slowly and protecting the foot. The terrain was hilly and rough underfoot, with the weather conditions being truly horrendous. I hadn't trained hard enough for this race and was in real pain with the foot. Despite crossing the line in a rather embarrassing time, I'd ran my first ultra and survived - all 34 miles of it (got lost for 1 mile).

This was a huge event for me - see how far I could run in 24 hours. I'd set 3 targets with 55 miles being the minimum. The weather conditions and terrain were truly horrendous and the worse I have ever ran in. Heavy ran for the bulk of the race; ankle deep mud in many places that really hurt my ankle. Ideally looking to achieve 75 miles but gave up (like many solo runners) after 55 miles (11 laps). Could have gone on further but my foot was really painful. If only the conditions were not so bad then I could have made the 75 miles. That said 55 miles is the furthest I've ran in a single run, I am proud of that.

After a few months recovery after Endure24 I decided to start focusing my attention on the shorter runs but with pace. The first of these was the Swindon 10k in November. Prior to the race my official 10k PB was 53.30 which I got at the Wargrave 10k back in June 2013. I've ran 10k races since but mainly hovered around the 55.xx mark. My last official 10k was the ADP Highclere event in September 2013 when I got a very disappointing 57.56. With only November to really get my PB down, I entered my first 10k race of the year. I set out to go sub-50 and was very happy when I crossed the line in 48:08. However there was part of me which thinks I could have gone quicker! The main problem I had was the pacing. I needed to focus on getting my pacing right and not getting too excited. In the back of my head I knew I could go sub-48 mins.

No sooner had I finished the Swindon 10k than I signed up for The 9Bar Chilly 10k the week after. This was a 3.5 lap around the undulating Castle Combe race circuit. This time I controlled my pace with more authority, and although I did stop a few times to catch my breath, I managed to hold on to record a new PB of 46:54. A huge improvement over the week before and an excellent demonstration of what can be achieved when the pace is controlled. I left the race circuit a very happy boy! No sign of injury and a nice shiny 10K.

2014 was never intended to be a year of Personal Bests (PBs), with the focus being heavily weighted towards distance running as opposed to shorter faster races. That said I have noticed through all my long-distance training that my pace, and more especially my pace with a lower HR, as increased. This has allowed me to achieve a number of PBs.

These are broken down by official and unofficial (unofficial either recorded as part of a larger race - e.g., first 5k of a 10k race - or on a training run):

It may not have been the furthest I've ran in a single race, but it was by far the most difficult and a huge sense of achievement in completing it give the injury, terrain and weather conditions.

Despite running 55 miles, the conditions and injury prevented me from running further. This run had so much potential - I felt gutted when I had to pull out after 55 miles. Had the weather been better then the injury may not have flared up and I could have achieved my target of 75 miles. The route is very boring and I felt a sense of anti-climax. It's a safe ultra to run, but the cost had increased and running 5 mile loops for 24 hours does get boring.


I've purchased a number of running items this year, but the following are standouts:

It's been an interesting year with some achievements but one that has ultimately been affected by injury. This resulted in less than perfect performances in longer distance events in the first half of the year. Although this has been (and still is) a major cause of frustration and resentment, it is positively countered by the fact that when I have been injury-free then my performances have been very promising and showed some real progress.

Training for long distance events does take commitment and a degree of selfishness. Weekly mileage of approximately 100km (62 miles) was common, with many weeks exceeding that. I came to love the early morning runs; although that said, the winter months were hard - very hard! However as the summer approached and the morning become light, it was a joy to get up during the week at 5am for a morning run before work; and even at the weekend when I'd be getting up at 4am to get a long run in, they would be enjoyable. I loved watching the sun rise as you got your early morning run in. I did the bulk of of my long distance training in the morning and all completed before 9am. I did this to avoid eating into family time. I've been lucky that my wife allowed me to train as much as I have done. However this come at a price; and that price was being over-tired on many occasions. Getting up very early in the morning was hard, and during those initial winter months at the start of the year, they were very hard. Running along the A4 from Newbury to Hungerford at 5am on a Sunday morning in winter in exposed conditions, with the wind and rain battering you was not a pleasant experience. But it needed to be done. As I started to move away from the longer distances and focused more on the 10k runs towards the end of the year, I decided to ditch the longer runs. Instead I ran 10k most lunch times at work and ran a couple of nights a week for an hour or two each time. Max distance was only around 23k. It was a much more pleasant and social experience.

During the course of the year I managed to achieve a number of 5k and 10k PBs, and done this without any specific speed work. The base training from the ultras had given me a good baseline from which to get those PBs.

As I end the year my fitness levels have most certainly increased, and this is reflected in the pace I can run with a lower HR. At the start of the year I had trouble getting any kind of pace into my runs whilst keeping the HR low; although not as low as some other runners, I can now see some real progress and this allows me to really control the runs whilst also maintaining a solid pace.

The year has been tough, challenging and frustrating; but ultimately rewarding. I achieved all the goals I set out to achieve and, although I had to pull out of a number of races due to injury (Trail Marathon Wales, Stort30 to name a few), I'm more than happy with the small number of races I did enter.

As I write this Mrs N is one day overdue on our second child. The reason for cramming so much running in this year, and the reason why I ran with an injury, was because I knew that next year my running will be curtailed - or at least the long distance running will be. Through determination, commitment and occasional stupidity, I've managed to come through the year with some achievements.

Before I end this entry I must also thank Mrs N for allowing me the time to train. She's not a runner (with the exception of some local jogging to stay fit) and she has no interest whatsoever in my running; however she has supported me by allowing the time to go out and train whilst she looks after our son. Without her I would not have achieved what I did this year.

I must also thank the Newbury Runners for their support and advice. A great bunch of people who support each other. I hope you achieved all your goals for 2014 and good luck for new ones in 2015.

I shall end by saying running is fucking awesome!!!! Set aside all the gadgets and technology, running is ultimately about you putting one foot in front of the other and moving forward. It's the easiest thing in the world to do; anyone can do it with a little help. The question you have to ask yourself is: how far and how fast? And that my friends is the challenge and is what drives us forward. Whether it's to run up and down the street; do a couch-to-5k; run 5k in sub-20 seconds; go sub-30 hours for a marathon or run 100 miles - it really doesn't matter. The most important thing is that you are doing it. Don't think about other people. There will always be some one better than you. So get out there, have fun, and achieve some personal goals that will make you feel like you are on top of the world.....
Posted by Unknown at 07:50