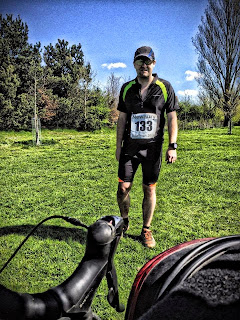 I never thought I'd see the day when I'd entered a bike race, but here I am just about to write a blog about that first experience. Of course being a runner means I couldn't just be a bike race but it also had to include running; and so it was, and my first experience of a duathlon was born!

I'd decided to break by duathlon virginity at the Newbury Duathlon. It was relatively cheap to enter and very local. I went there with no real expectations; and although I'd being doing quite a bit of running of late but cycling was poor. Prior to the race I hadn't been out on the bike for 3 weeks and even before then I hadn't trained. I see the bike as a means to an end - i.e., to help prevent and/or get me through running injuries. So to enter a race where the bike forms the bulk of the distance was going to be interesting to say the least.


The Newbury Duathlon (my home town) is made up of a 5km run, 25km bike, 5km run - all runs take place off road along tracks and fields surround the lovely village of Chieveley (just north of Newbury). After arriving at the venue having forgotten my helment and then having to drive home to pick it up, I entered the main waiting area of the race and spotted and awful lot of very posh (not to mention expensive) bikes. I stood there with my cheap and cheerful Cylcocross from Halfords and tried to forget the competition. I was there just to have fun and experience my first duathlon. I had no idea I'd fair. What I did notice however was the strong wind; and readers will know how much I hate wind!


After registering and attaching all the numbered stickers on my bike and helmet I then briefly caught up with Jason Tillen on the start line, where the wind was mentioned again. The countdown began and before we knew it we were off....


The first part of the run was around a playing field before then hitting a road for a couple of hundred metres. Before I knew it we were off-road. My pace was good and pretty much the first couple of kms were downhill along tracks boardering fields. With such a short distance there isn't really much to report. I kept the pace solid and quick but without being too quick. In actual fact it felt comfortable. There was a hill half way through which although I flew up knew deep down that after the bike it would be much harder.

I eventually cam out onto a road and with about 1km left I entered the transition. I completed the first run in a time of 22.35. For me that was a quick run but made sure I didn't push myself too hard. I entered first Transition content with my performance thus far.

Transition 1 (T1)
What a balls-up I made of this!!! It started so well. I ran to to my bike and quickly unracked it and ran to the exist. Just as I was about to get on it I was told I'd forgotten my helmet! I therefore had to run back into Transition and pick it up. That cost me dearly. The extra time I spent in Transition was added to the Bike time. My T1 time was a very quick 38 seconds! If you ignore the cock-up then I was very pleased with that.

Bike (25km)
I was dreading the bike. I'd really not trained for it. That said I jumped on and peddled at a controlled but steady pace. Along the straights and downhill I felt fine; managing to get some pace. However the hills really got me. For pretty much 3/4 of the bike only a handful of people over took me. There was a killer hill though and I was so glad I was on my own when I hit it. I went so slow up it that I felt like getting off and pushing. I didn't but it was embarrassing to watch (but thankfully nobody was). Once at the top it was much easier to the finish. I'd messed up the settings on my watch during the mess that was the Transition so I didn't actually record my bike activity. This means I had no idea how far I'd cycled or more importantly, how much distance I had left.

I continued to plod long and before I knew it I was entering the village again and the Transition. With crowds cheering I got off the bike and pushed it into Transition 2. I'd completed the bike in 1:02:59 - a rather disappointing achievement I must say. Would like to have come at least mid-50s; but that's what I get for not training for it. Alas I had no idea of my time due to the watch not recording it.


As I exited the Transition and hit the road my legs felt a little wobbly. I knew this feel due to what little training I had done, but to be honest it had never had an impact on my running performance. Back onto the tracks and it felt like I was running slowly when it actual fact I was running sub-5 min/km. The first part of the run was good as it was slightly downhill / on the flat. However I then hit the hills. 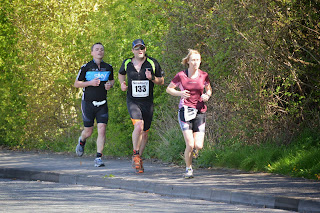 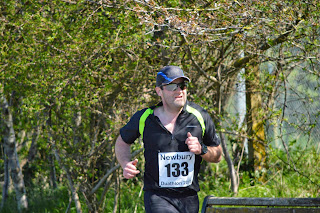 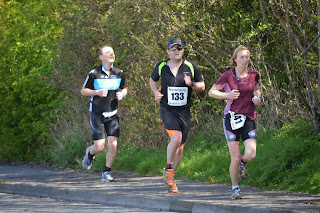 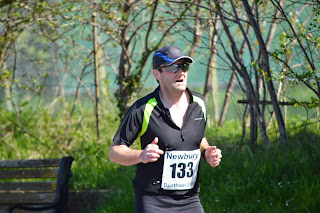 My legs really did not like the hills at all and I had to walk a little part of them. They  felt so heavy from the bike. As a result my heart rate was really climbing. In order to combat this I pulled behind a fellow running who was running at a pace I wanted to run at and just stuck behind her and focused on both her and getting my heart rate down. This worked. I followed her all the way to the Transition area and by the time we hit it I'd recovered. I was then able to overtake her and sprint around the field before finishing strong. It was a controlled run and I was relatively happy. I'd done the second 5km in 25:12. Ideally I'd have liked to gone sub-25 mins but was still content as it was my first experience of off-road running in a duathlon. 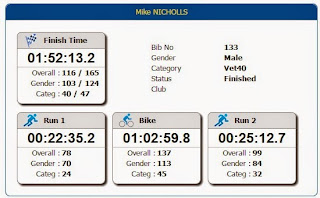 Given I'd never done a duathlon I was very happy with my performance and I actually enjoyed it. It was very different from just running; although it's obvious from looking at the times that I'm more a runner than a cyclist. I was particularly happy with my Transition time.

I would most certainly do another one, but whereas with running I'd be looking for specific times, I think with the duathlon I'll just enter them for fun and try to forget about times - especially the bike times.