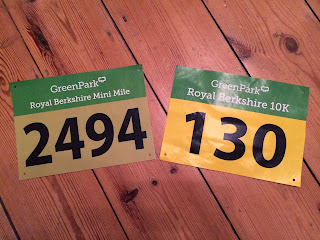 The phrase "do as I say and not as I do" has never applied so much as it did last Sunday when my 4 year old son Xavier and I ran the Royal Berkshire event at Greenpark, Reading. Xavier was entered into the Mini Mile whereas I ran the 10k, and although his race was only 1 mile (1.6km) he controlled the pace perfectly and finished strong. The less said about my race the better, although it will be covered in a separate blog report. Not only did he enjoy running it but he also completed it in a very respectable 10:31. 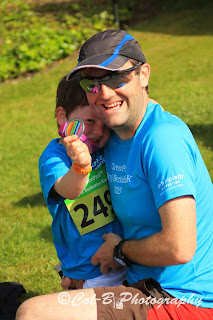 This was only Xav's second race. He ran a 700m event when he was 2 years old at the Hursely 10k. He loved running the event and, more importantly, he loved getting a banana and medal at the end. He was so small then that his bib number was almost as big as him! Since then we've discussed running another event but never actually got round to it. However when I entered the Royal Berkshire 10k this year I noticed they were offering a Mini Mile and Mini Marathon (3 km) for the younger ones. I signed Xax up for the Mini Mile, which is basically 1 mile (1.6 km).

Training
As it had been such a long time since I signed Xav up to the 1 mile event, I went and confused myself by thinking it was a 2 km race! That meant training for Xav would entail 2 km. Now I didn't want to push him too hard nor do it in such a way that would him off, so I planned to take him out for just a couple of gentle training runs.

The first run was to see whether at a slow pace he could actually make the distance. So one Sunday we set off from our house and ran 1 km down a straight road and then ran back. It was hard trying to stop him from shooting off. I was trying to explain that he needed to run slower so he wouldn't get too tired to the end (something I'm still trying to learn!). Even though it wasn't hot I realised that the next time we run I'd need to carry a small water bottle for him.

A couple of weeks later I took him out for another run. Very similar in nature but in a different direction. This time I made sure he didn't shoot off, and I took water for him to drink. After a km he kept stopping and wanting a drink. In fact he stopped more times than the first run. I promised him that I'd be running next to him in the race and should he need any help then I'd hold his hand and run together.

Both of these 2 km runs were ran with an average pace of just over 8 min/km (so completing the 2 km in 16:xx). I felt confident he could run the distance. Time wasn't important - he'd enjoy himself so much.

The Monday before the race I took him out for a very short 600m leg stretcher, which he did no problems and we chatted as we ran. He did it with a pace of 6.34 min/km.

However later that week we got our race packs and I only then did I realise that I'd entered him into the mile event...D'OH! 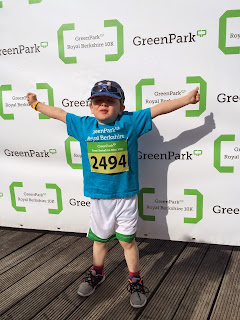 We arrived at the event with about 15 minutes to spare until the kids taking part in the Mini Mile were asked to walk to the start line. Xav and I walked on and chatted. He was mega excited. Then began the warm-up exercises. Xav seemed to enjoy these but they did go on quite a bit and in the end I told him to relax or he'd tire himself out. So with Xav warmed up and ready to go, the hooter sounded and he was off!


Xav bolted out and although he was being overtaken by a few older runners he managed to hold his own. Once we'd cleared the initial surge I looked to try and control his pace. The route was a "there and back" with the outbound journey slightly up hill / flat. He overtook a number of runners. As he ran we chatted, went round a roundabout and he was getting some cheers. He started to overtake more and more runners. He didn't seem to be puffing and was actually enjoying it. The first 500m flew past and up in the distance we could see the turning point. By 700m we could see some of the faster runs on the loop back. Xav was doing really well and his pace showed. He got to the turning point and I gave him some water to drink, with a marshal encouraging him and telling him he was a good boy for drinking. Now for the journey back!

We looped round and Xav was off again. No stopping the lad. We passed the 1km mark and my watched beeped to indicate he'd covered it in 6.23 min/km. That was his quickest 1km thus far!

As he passed more runners he was getting huge cheers from some of the crowd. By around 1.3km he started to slow a little but didn't stop. A few runners overtook him but he didn't like that and "kicked in". We were going slightly down hill at this time. In the crowd a young woman has a huge foam hand for the kids to high-five. When Xav approached her he jumped in the air and high-fived! He loved it!

We could then start to see the finish line and I asked Xav if he wanted to sprint to the finish. Of course he wanted to - and off he went. My little 4 year old storming to a personal victory with a very proud dad behind him! He crossed the line for a total time of 10:31, with the last 600m ran at an even quicker 6:15 min/km. 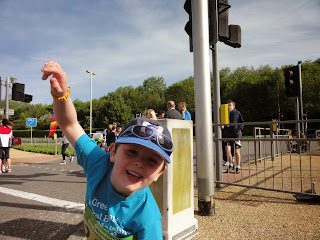 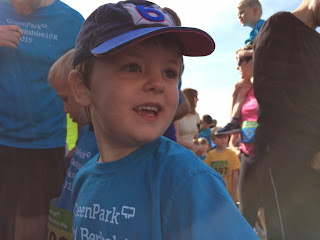 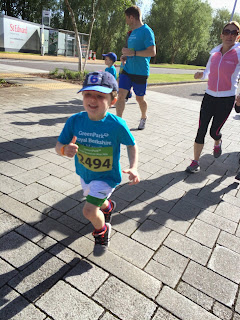 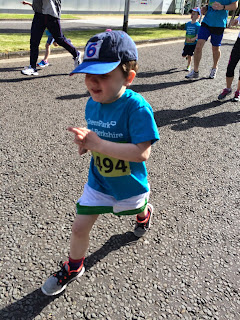 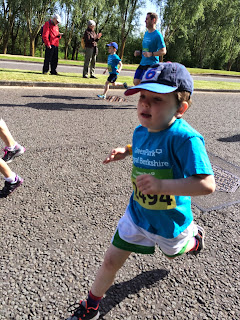 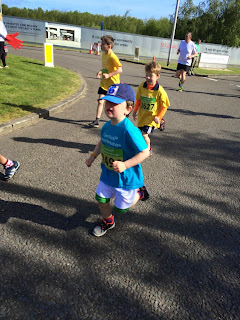 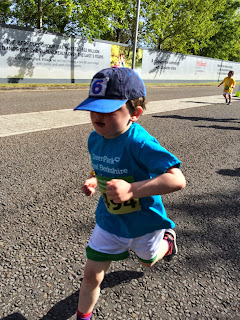 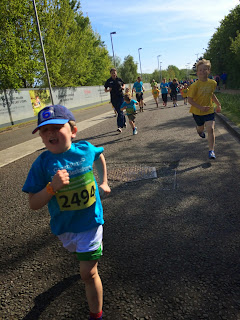 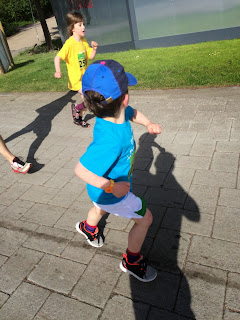 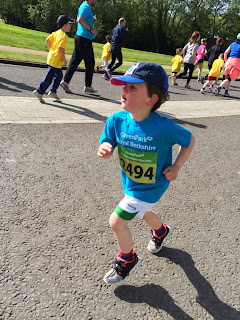 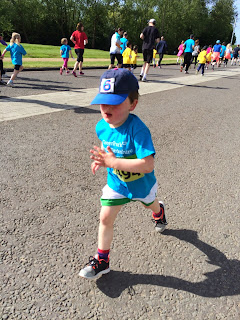 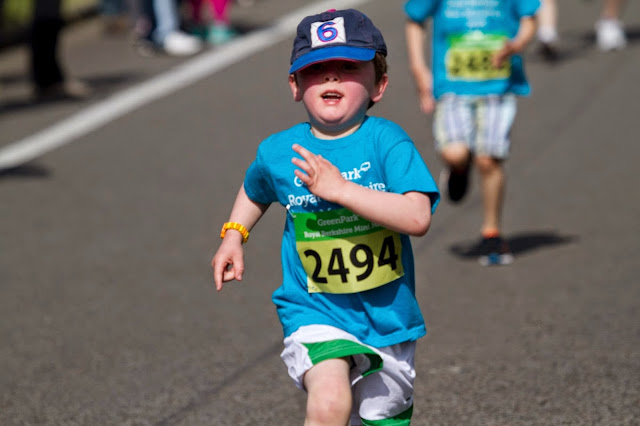 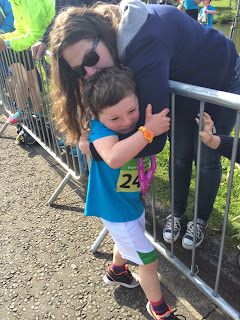 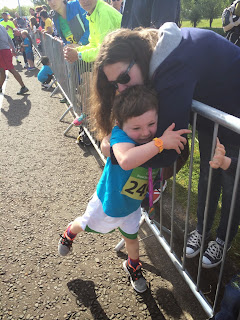 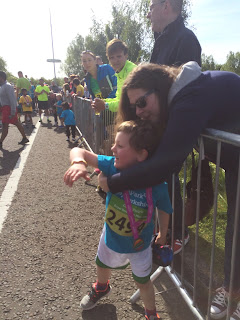 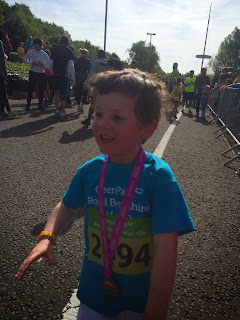 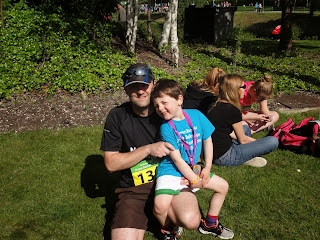