So here it is – my first running blog!

I have to say I was in two minds about starting such a blog. I’m almost certain that the majority of my friends are not interested in my running exploits, let alone having to read about them in a blog. For some it’s probably bad enough that my Facebook status updates are constantly running related. However for me it is more about providing a medium to express the highs and lows of training for not only my first marathon, but 3 marathons and an ultra in the first half of 2014. This is the challenge I’ve set myself – I may not succeed, but it is something I need to at least attempt. My wife calls it a mid-life crisis since most of the above will be achieved before my 40th birthday in June 2014, and maybe she’s right; or maybe I’m just crazy! I’m thinking the latter…

Over the next several months I’ll be regularly updating this blog – hopefully on a weekly basis. It’s winter now, so the majority of my running is training. My formal marathon training plan starts on the 16 December, and this will [hopefully] prepare me for the Manchester Marathon on the 6 April. This will be my first marathon. Although I’m not “time-drive” or a “PB-Chaser”, I do set myself some running goals. It would be nice to run the Manchester Marathon in under 4 hours. I specifically chose that course because it is flat – very flat! This will allow me to hopefully keep a constant pace without the nasty distraction of hills (which tends to ruin my pace and rhythm).

So here I am: smack-bang in the middle of winter and preparing for my formal marathon training to start. Over the past 2 weeks I’ve done a couple of long-distance runs. Now when I say long distance, I mean they are long distance now because I’ve never run that far before. Hopefully in a couple of months I’ll be downgrading them to “medium” distance as my mileage increases….

The location of these two long runs was the Ridgeway. The Ridgeway is a rather deceptive trail route and can, if you’re not too careful, catch runners out. It’s a “there and back” route over some tough terrain in places, and some long steep ascents and descents in other places. It doesn’t matter what the weather conditions are or the pace you run, the Ridgeway will pound your legs, ankles and feet.

Running the Ridgeway forms part of my long distance training, although I will be mixing it up with road running. A week ago I managed to convince some of the Newbury Runners (a local group of like-minded runners) to join me on the run. I wasn’t organising a specific event, but asking people that if they wanted to join me then they were most welcome.
There was no set pace - people could run as fast or as slow as they like, or could run as far or as little as they wished.


As I was building my base I would be running at a relatively slow pace (Zone 3 or max 155bpm). For me these runs are about keeping my HR low and time spent running as opposed to pace. 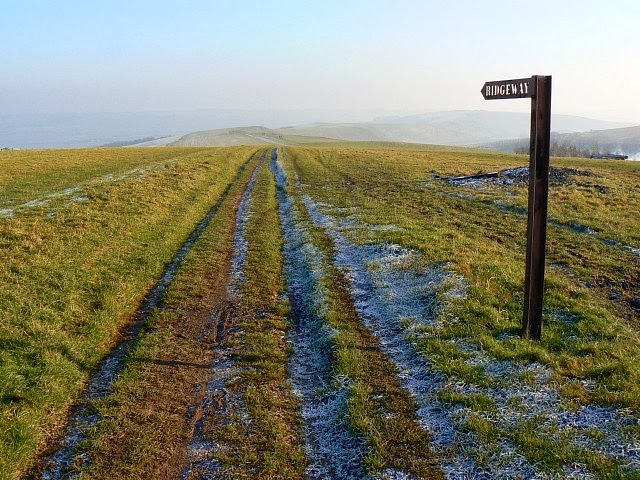 So at 08:00 a number of us met for the first run. I was joined by Greg Filmer, Matt Parker, Matthew Brookes and Brian Emms (with Jack, his trusty dog). It was a cold morning but at least it wasn’t windy or wet. We all set off and for the first 5km we were running at around the 5:35 min/km pace. This was too fast for me as I was supposed to be running slow. My Garmin was beeping and beeping and bloody beeping – all the beeps were telling me to slow down. I was in the groove though and enjoyed running as a pack. However I knew I had to slow down, so I dropped my pace to a point when the watch stopped beeping at me. This meant I slowed down so much that it wasn’t long before the rest had shot off. It got very lonely very quickly! However it meant I could focus on running slowly without the added pressure of running with friends. The plan was to run out about 11k and then run back. Deep down in my head I always knew I’d run a little further – I just didn’t tell anyone.  I caught up the guys at the 11k mark (as they’d been waiting for me). They were just about to head back, but I told them I want to carry on for a little further. Running a slower pace meant I wasn’t feel tired and the legs seemed fine.


So off they went and headed back to the start whilst I trundled along the route until I hit the 13k mark. There were a couple of steep hills in the process but I still felt fine. I then turned back.

On the way back my HR kept exceeding the 155bpm. This was frustrating and after a while I made the mistake of slightly ignoring my watch and just carried on running (all be it slowly). It was a little struggle towards the end – mainly because I’d never run that far before. In the end I clocked 26km in 2hrs 50 mins. I had a nasty shock when I got home and uploaded the stats into Garmin Connect. My average HR was 169bpm; was running on average 90% of max HR; and was averaging Zone 4.9 as opposed to Zone 3 I was aiming for. This was not good and was a huge lesson about keeping to the correct HR zone. No wonder my legs were sore for the next 5 days!

My 2nd attempt on the Ridgeway (undertaken yesterday) was a far better achievement. I set off with Nathan Darling at 7:30am. It was warm, dry and not windy – perfect running conditions. As there’d been no rain for the previous week, the terrain was slightly harder. We set off together at my Zone 3 pace and we ran together for approximately 5km (including a small detour as we took a wrong turn) before Nathan shot off at his normal pace. I was focused on staying at Zone 3 (155bpm).

It was infuriatingly slow at times but I knew I had to keep up this slow pace. I also had to be careful of my knees, which had become a little sore after the first attempt the previous week. Going down some of the steep descents was a challenge. Ironically I was so slow that my watch was telling me to speed up (now that’s a refreshing change!). However I wanted to protect my knees so kept at a very slow pace and the steep descents.

I caught up with Nathan as he was on his way back. He’d run approximately 12.5k outbound and was heading back. I carried on and this time went out for 15km before then turning back. It seemed like “forever” before I managed to reach the start, and I was on the Ridgeway for a total of 3hrs 33 mins (covering just short of 28km; slight detour we took meant I missed the 30km mark – aarrgg!). However my pace was bang-on. I stayed in Zone 3 for the whole run and I felt quite refreshed afterwards. In fact I felt like running even further!

I’ve never run for that length of time before, and it took a little of me for the rest of the day. I had light pub lunch with a pint of cider; took my 2 year old son for a walk around the block and to the playground; and then around 5pm I just wanted to go to bed. By 9pm I was in bed, and fast asleep.

I woke this morning and the knees are not feeling too bad. I have a sore ankle, but hopefully that will clear up in a couple of days. I suspect it’s the ankles just getting used to running on tough terrain as opposed to smooth roads.

Despite the boredom of running for such a long time on my own and at such a painfully slow pace, I feel like I have achieved a couple of things. First and foremost is my ability to focus and stay in the correct Zone, despite it being mentally challenging running at such a slow pace for such a long period of time. I know it won’t always be like this. Once my base training is done I can then start to throw in some race-pace.

But at the moment it is all about baby-steps….
Posted by Unknown at 04:26