Unless you have one of the latest Garmin watches or the older 310XT then one of the limiting factors of your running watch (especially the older models) will be the dreaded battery life. For most casual runners this isn't so much of a problem. The majority of the Garmin watches on the market will last between 5 - 10 hours, with the 310XT claiming to last up to 20 hours. More advanced (and highly expensive) models have an even longer battery life, and so are ideal for long ultras and/or Ironman competitions. However if you are one of those people whose current watch has a stated battery life of between 5 - 10 hours, plan running for around that length of time or longer, and would rather not splash out on a new watch, then there is an alternative. The portable battery charger. 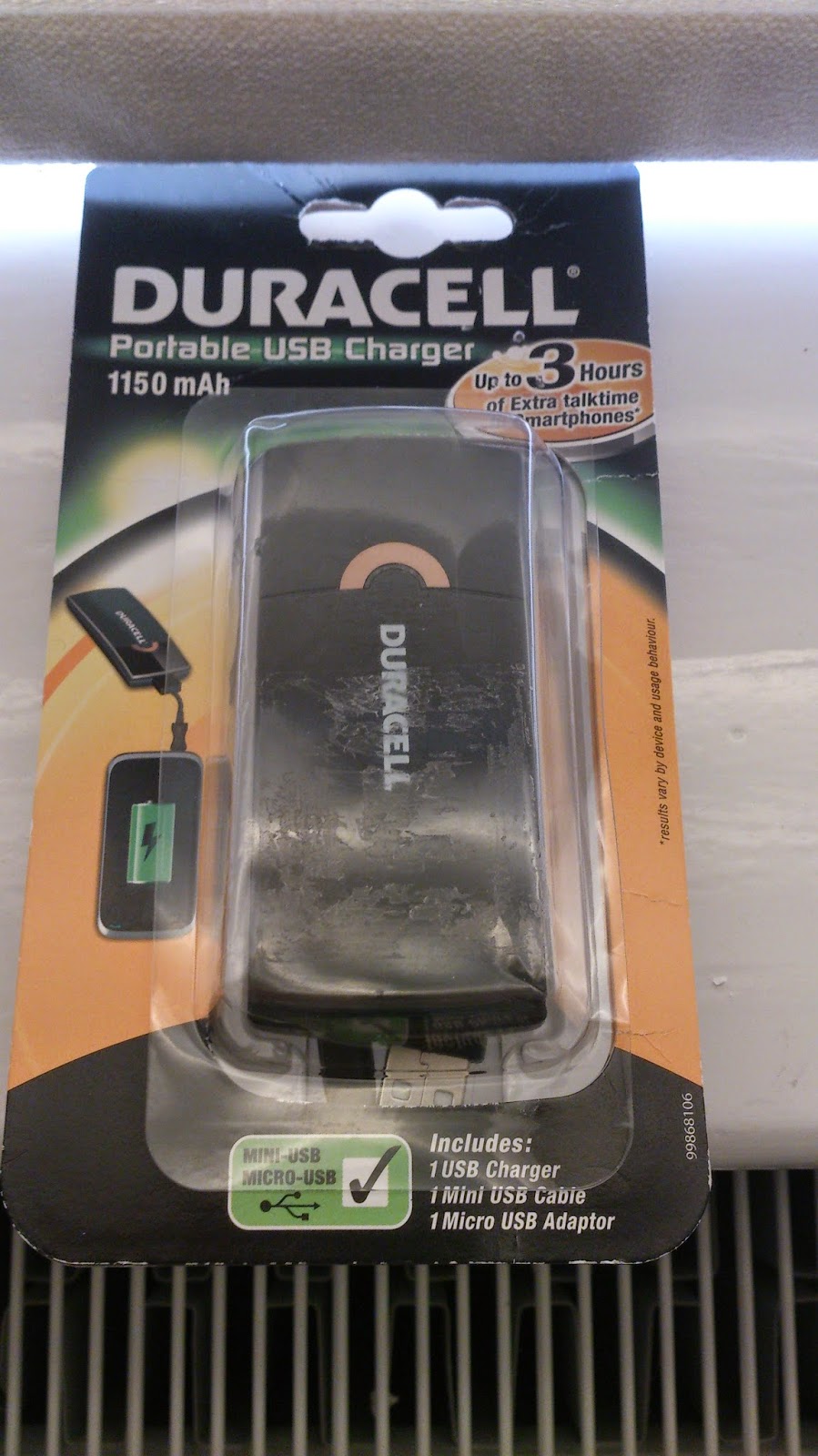 There are a number of these on the market and retail at around £18. The one I am testing is the Duracell Portable USB Charger 1150mAh, which I got a bargain-basement price of £8! The watch I will be using will be my trusty Garmin 305, which the manufacturers claim has a 10 hour battery life.

Naturally a GPS watch is not listed so I have no idea of the expected charging ability of this little device. Hence the need for this test. 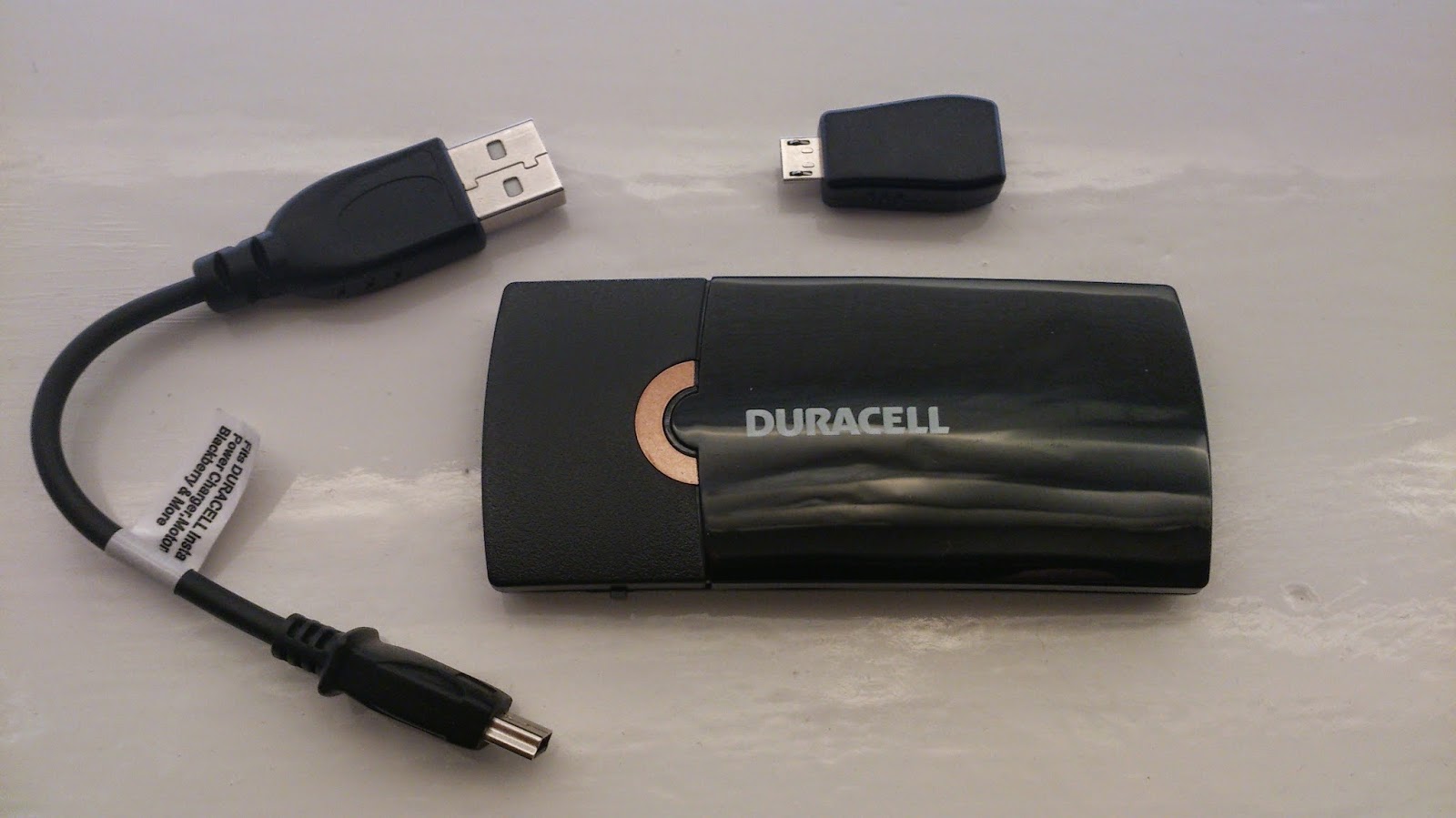 The following was in the box: 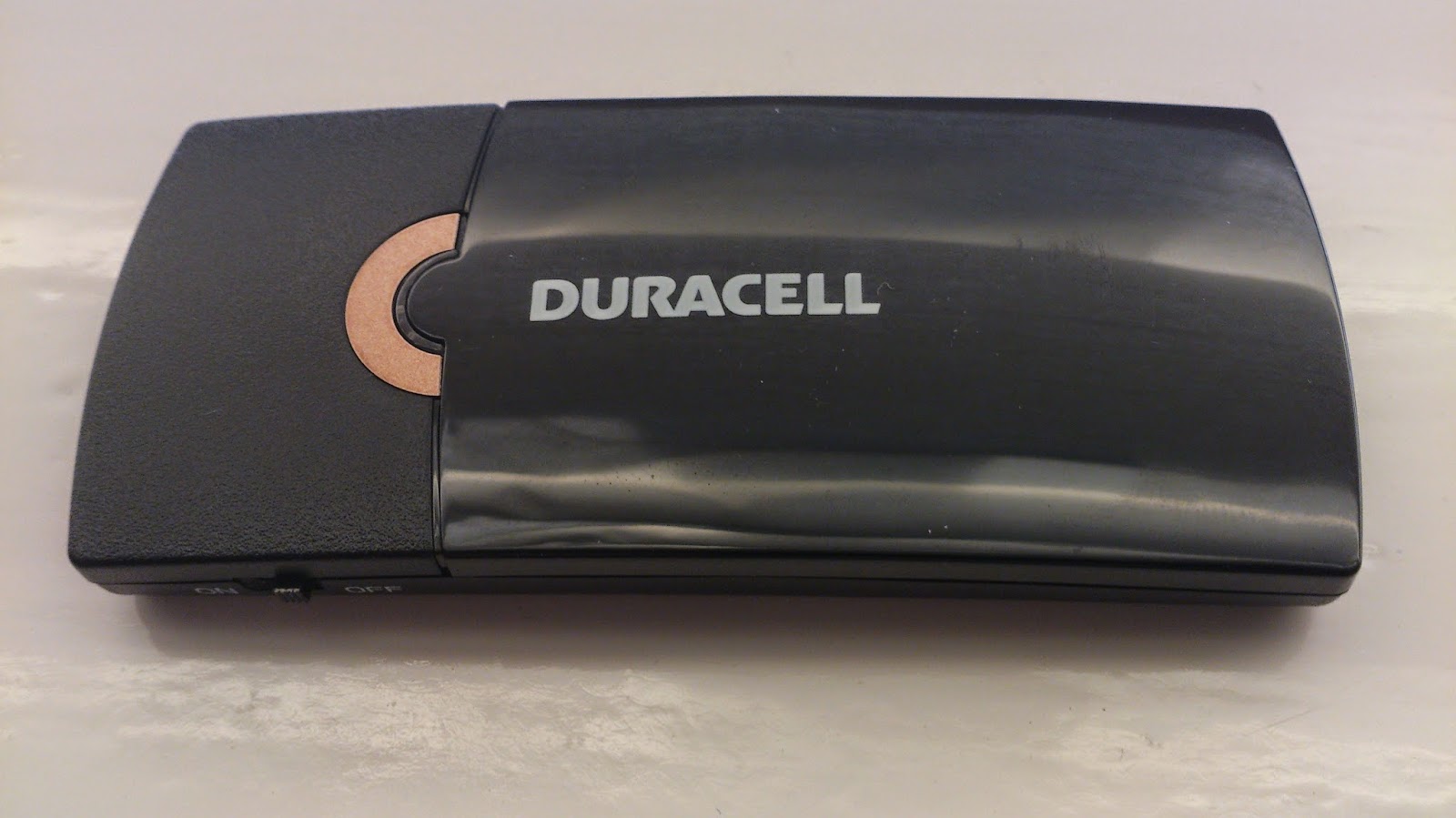 The USB Charger itself is quite attractive, relatively small and very light. Unlike older versions which took two AA batteries to charge, this latest version is charged by the mains or laptop (using a USB connection). This means the size and weight is kept to a minimum - very handy for when you are running with it. 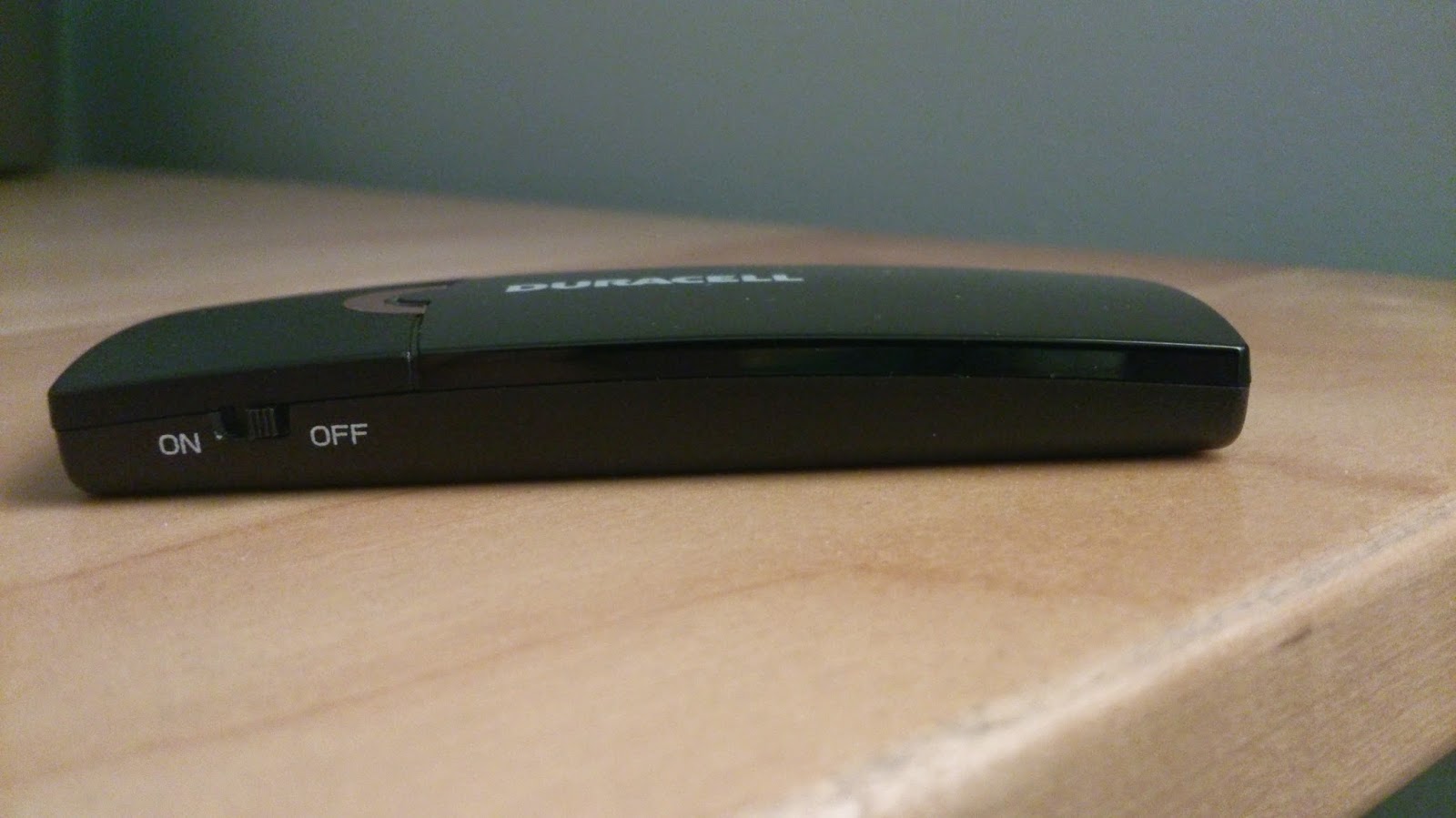 
Charging the USB Charger
Charging the device couldn't be easier. It can be done by either plugging into a standard USB port on a laptop, but more effectively by simply plugging it into the mains. Takes around 45 minutes to fully charge, with a little green light indicating when fully charged.


I tested the device on a 9 hour run using an my Garmin Forerunner 305. Before I started I fully charged both the device and the watch, and then connected both devices to ensure the connection was firm. I also used a different cable than the one provided because I wanted it longer for ease of charging whilst running. My mobile phone cable was a good length. 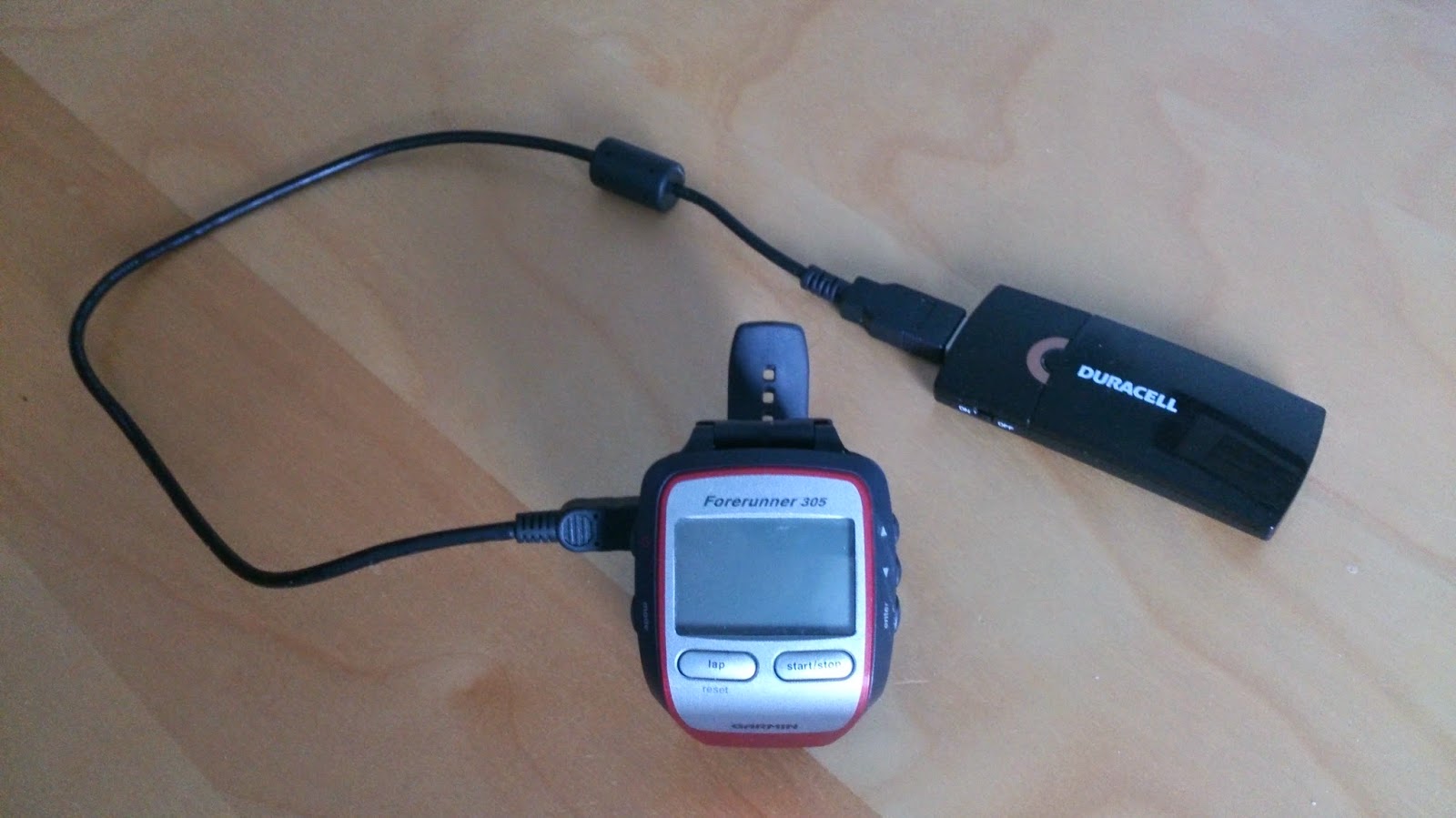 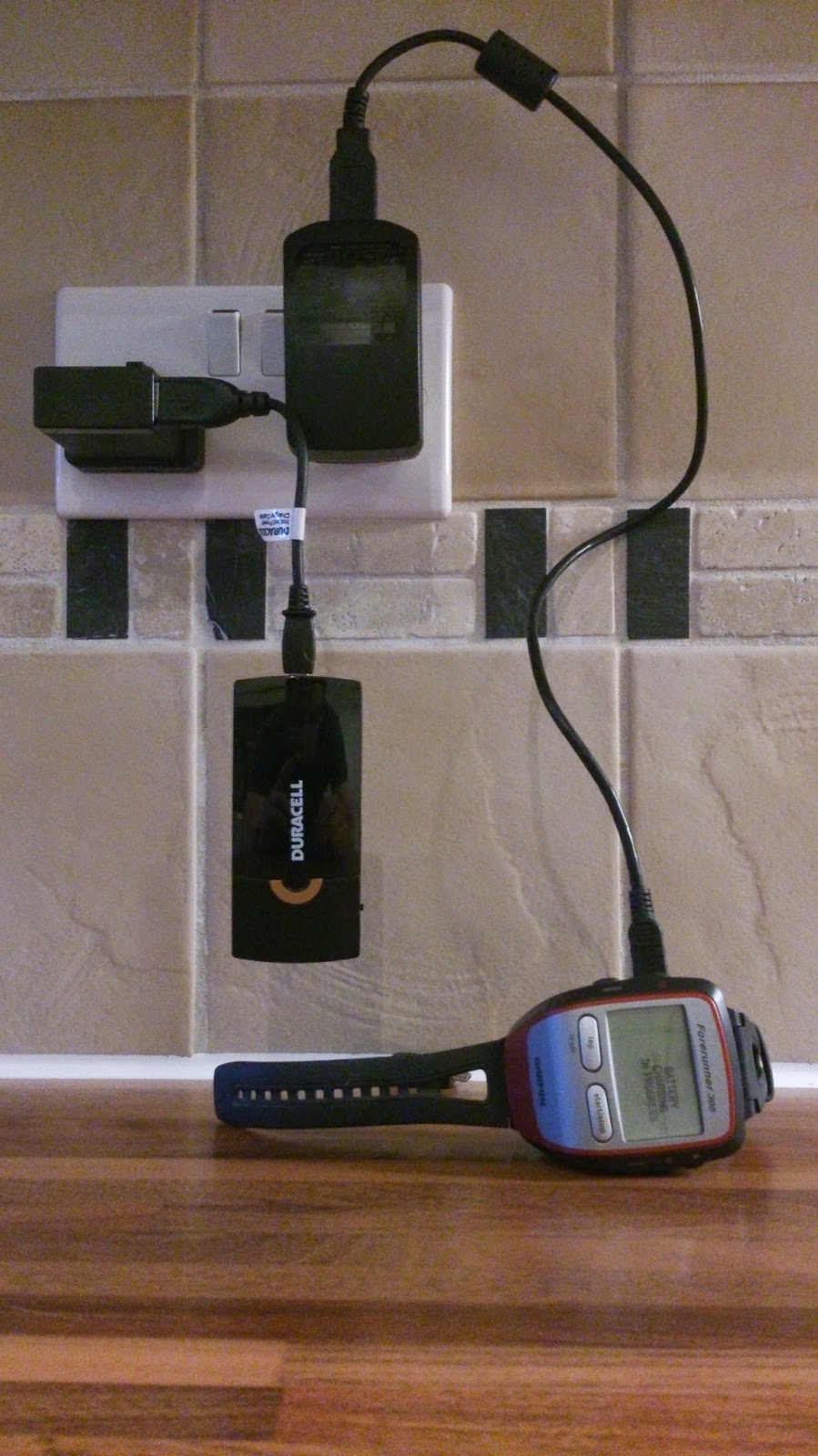 I stuffed the portable charger, cable and the charging cradle for my watch into my hydration vest. After approximately 5.5 hours of running I noticed the battery indicator on my watch had gone from 5 to 2 bars. This was the time to test the charger. I clipped my watch onto the charging cradle and attached the portable charging device. I then put the watch back round my wrist. Note that it was on the last hole of the strap, so if you have slightly larger wrists you may need to fit a larger strap before the run. I then place the actual portable device into one of the chest pockets on my hydration vest. Due to the small size it fitted along side a bottle that was already stored in the pocket. I turned the device on and it started to charge my watch. So with the watch feeling a little bulky (but not uncomfortable) due to it being attached to the cradle on my wrist, I continued my run.

The Forerunner 305 allows you to continue to monitor all the data whilst charging. Other models such as the 310XT prevents you from seeing the data until you detach the charging device (a backward step in my view). I needed to see the data because I was using the navigation function and was constantly looking at my GPS position in order to follow the course.  After approximately 30 minutes of charging my watch was back up to 5 bars and fully charged. This allowed me to continue the race without the fear of running out of jungle juice. When I finished the run I still had 4 bars on my watch. 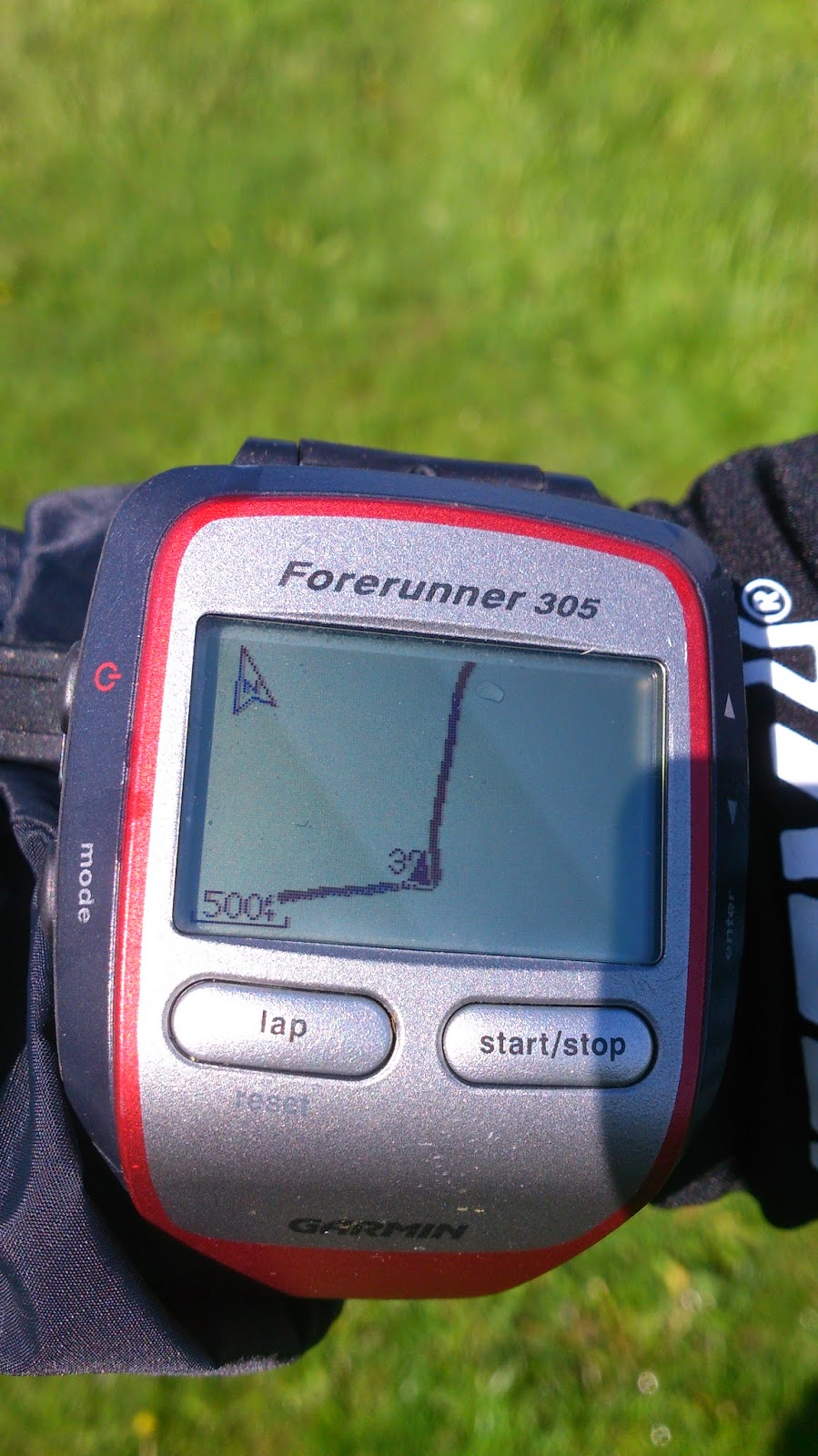 This is a great little device for those people who want to run long but worry their watch will run out of battery (especially good for those with a Forerunner 10, that only has a 5 hour battery life). Rather than attaching it to my wrist with the cradle I could have just attached it to my hydration vest, but on this test I needed to see the data. It did precisely what I needed and was easy to use. I'm unsure how much charge you can actually get out of the device. On a 24 hour run it may struggle to keep the watch fully charged (will give it an endurance test at Endure24 in June and then update this report), but for a 9 hour run this device was excellent.
Pros
There are a couple of positives I'd like to highlight:
Cons
There are not many cons to this device for the money it costs, but there are a couple of things to note: