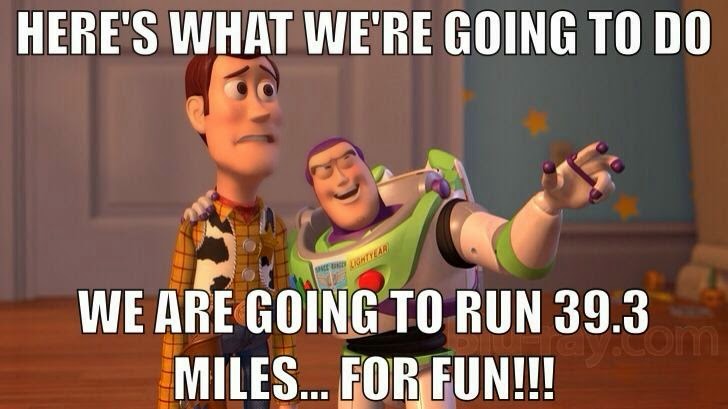 A new year and so begins the new challenges - all be it with a slightly different focus!

My daughter, Clara Róisín Nicholls, was born on Boxing Day. Along with this bundle of joy and sleepless nights comes a new set of running goals; goals that are focused more on speed than distance.

Last year was all about distance running and seeing how far I could run. This year, and due to the arrival of Clara, the time I have available to train is severely reduced. Therefore my focus for 2015 is on speed and achieving a new set of PBs for the following events:


Despite only being a couple of weeks' into the new year, I've already managed some good training runs that have both speed and hill work involved. There are two routes that provide me with a solid indicator of my current fitness levels.

For short-distance work (10km and below) there is the David Lambert Special. A 7.6km figure of 8  between Wash Common and Newbury which takes in some steep hills. David Lambert, for those who were wondering, is my next door neighbour and he runs this route ever other morning at some ridiculous o'clock time. He averages 40 minutes, but to be honest he's probably not pushing himself to his limit. I've ran the route twice. In October 2014 I did it in a respectable 40:09 with an average pace of 5:15 min/km. I ran it again last Saturday and, despite the harsh wind, managed to complete it in 35:24 with an average pace of 4:38 min/km. I was very happy with this and a good start to the year. Take the hills and wind away and that pace would give me a very good 10k time come race day! Incidentally the first 5km of this run gave me a new unofficial 5km PB of 22:05 - that's a whole 52 seconds off my official parkrun time!

For mid-distance (10 mile and Half Marathon) there is the infamous 17.2km Tesco-Garden Loop. Those who have read my blog will know about this route. I've ran it many times and although a very boring route it is an excellent route for testing mid-distance fitness due to the hills involved. Last week I achieved my quickest time of 1:26:26 with an average pace of 5:02 min/km. Take the hills out of the equation and that would give me a storming new half marathon PB. Incidentally the first 10 miles of this run gave me a new unofficial 10 mile PB of 1:20:10!

Along with the above runs and a few recovery runs I also managed to through in a long-slow 33km run. So a good start to the year and, despite currently having man-flu and not running, the runs thus far this year have given me a little confidence going forward.


Having a new baby (along with a 4 year old) means my training needs to be more focused and with less weekly miles than 2015.

I'm currently able to run during my lunch. I've been doing it for almost 4 months now. I can do a 10km route at sub-150 bpm in an average time of 53 mins. In the past I've tended to do this 3-4 times per week, but once I get rid of this man-flu I hope to do it 4-5 times per week. I can play around with the run and mix things up: speed work, progression runs, negative splits, slow plods, strides, etc. I'm going to play around a little.

I'm also hoping to still run a couple of times in the evening. Monday and Wednesday nights are the two nights I've been running regularly. Monday tends to be when I run a slow but hilly 21k route (couple of hours) and Wednesday is when I am out with the Newbury Runners (1 hour). I'm also hoping to attend Parkrun more often this year. Parkrun and I have a love-hate relationship. It's a 5km sprint around the common and I really do not enjoy running the route or running that fast. Nonetheless it is one of the events I'm looking to get a new PB at this year, so have decided only to attend as and when I feel I'm fit enough to have a PB in my sights. Long runs at the weekend however, are out for this year...

I've set the following targets for 2015:


I've tried to mix realistic with ambitious. The 5km target should easily be possible based on my unofficial personal best; however that was done on a road during an afternoon and not around the uneven terrain that is parkrun first thing on a Saturday morning. I do not perform my best at parkrun so although the target time of 22 mins looks easy, I personally think that will be a huge achievement on my part. Compare that the 10km and Half Marathon target times; they should be possible with the right training, pacing, terrain (no hills) and weather conditions (no wind).


I've spent a little while looking at events to enter and I'm a little reluctant to sign-up to events too far ahead of time. Parkruns occur every Saturday so when I feel like it I will just attend one. That leaves the 10km and Half Marathon. My son goes swimming and RugbyTots on a Sunday morning so I need to be careful how many events I enter on a Sunday as it would mean leaving my wife to take care of both him and the baby or meaning he misses those activities on a given week so we can go to my events as a family. Where possible my events will incorporate a fun-run for him to attend (he's done one before and enjoyed it).

Thus far on my radar I have the following booked:

No doubt more will be added to the list shortly!


2015 will be an interesting year and one that will be the complete opposite of 2014. Although I'm not a speed demon and prefer the long slow runs, it would be nice to bag a few PBs on the shorter events whilst also striking a nice work/family/running balance.