Flu and Road to Recovery 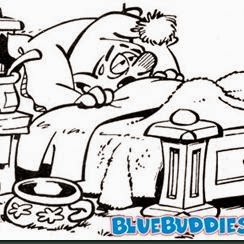 It's only inevitable that after such good week of running (as was the Christmas week) that the following 15 days would find me laid up in bed with a serious dose of the flu. I caught it on the 30 December 2013. It was a pretty bad dose that required two visits to the doctors, eventually being given antibiotics. At one point I was coughing so much that it was making me sick. This frequently happened. It wasn't nice...

Towards the end of the illness I was itching to get back out running, but needed to make sure the conditions were right. The three conditions I set out were: the previous night I wasn't coughing my guts up; on the day of the run it was not cold nor wet. On Monday 13 January 2014 those conditions materialised, and so I prepared for my first run of 2014.

My First Run of 2014
After 15 days of illness, my first run back was always going to be difficult one - and it didn't disappoint!

I hadn't fully recovered but felt I'd done enough recovery to at least attempt a gentle 10 km. The plan had been to run a gentle Zone 2 (max. 139 bpm). So on Monday I put my running gear on, fired up the Forerunner 305, switched the head torch on, and set off... within minutes my watch was beeping away telling me that I'd exceeded Zone 2 - WHAT! I'd only just started running! There and then I knew this was going to be a frustrating run. To make matters worse, I was coughing and spluttering throughout the run....not good!

I was approximately 4 km into the run and all of a sudden my HR went from 139 bpm to over 160 bpm! Even when I stopped, the HR kept increasing....! My HR monitor was playing silly-buggers. I tried to keep to Zone 2 but I just couldn't without walking. After another km I decided to turn this run into a "free run". I stepped up the pace to around 5:30 min/km and ran for another 3 km then slowed down, reverted to Zone 2 for a couple of km and then finished the run in Zone 3. My time for the 10 km was a disappointing 1 hr 22 mins. I could have run faster but not within Zone 2.

Although it was good to be out running again I was hugely disappointed. Even though I'd not put any weight on over Christmas and through my illness, my fitness had diminished! I'd worked so hard to improve my Zone 2 times, and here I was having to start from scratch again with base fitness. That's my sub-4 hour Manchester Marathon target gone out the window! I had a 16 week training plan to take me up to the 6 April and Manchester. I successfully ran the first 2 weeks, then was ill for the last 2 weeks, and it will probably take me another 2 weeks to get my fitness levels back. That's 4 weeks out of 16 when I've either not been able to run or if running, just struggling to get fitness back. This is not boding well for me and my first challenge of 2014! I'm on a low at the moment.... 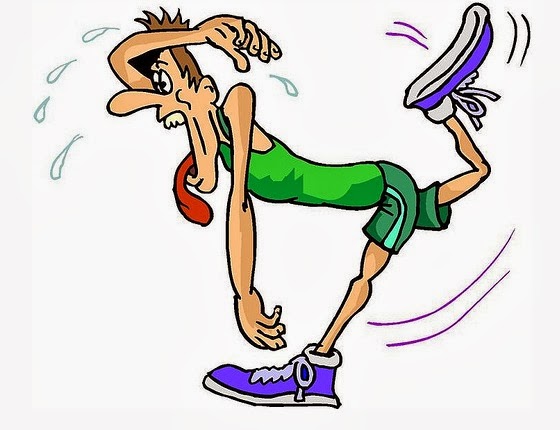 My first week back was also never going to be a full training week (i.e., doing progressive runs, sprints, hill work, as per my training plan). My next run was another attempt at a Zone 2 run (most runs this week are of this type, in an attempt to get my base fitness back). I decided to have a rest day Tuesday and so on Wednesday morning, at 5:30am, I headed out for a 15.73 km Zone 2 run. This is my planned mid-week run that is half the distance of my long run.

As I expected this was a long and tedious run. I've really lost my Zone 2 pace, and this couldn't have been more evident that in this run. On Christmas Day I ran 13 km in Zone 2 in 1 hr 36 mins; today I could only run 10.86 km in that same time (and even then I kept crossing over into Zone 3). It was painfully slow and I was running out of time (after all, I needed breakfast and shower before heading off to work!). I therefore ignored the HR monitor and for the last 4 km picked up the pace to complete the 15.73 km in 2hrs 12 mins. It's a rather embarrassing time - but that's what a severe dose of the flu does to you. At least I ran for over 2 hours, which is good...

Thursday brought my first set of intervals post-illness. Now before my illness I was starting to make progress on the intervals. My 500m intervals involve the following: warm up for 1km at Zone 2 (139 bpm); 500m sprint (Zone 5); stop until HR comes under 139 bpm then run in Zone 2 for 500m (recovery); then sprint for 500m (repeat 6 times); then cool down with a 500m Zone 1 jog. This was going to be a test of how much the illness has taken its toll on my fitness levels.

Friday was a rest day, which was needed. I didn't want to push myself too much during my first week back.


Saturday brought a very gently 45 minutes Zone 2 recovery run. My heart rate monitor was playing up again. It's amazing how quickly it can fluctuate in its reading - it can go from 139 bpm to 160 bpm within seconds, and likewise come down from 160 bpm to a crazy 120 bpm within 10 seconds. I know these monitors are not perfect (I use a Garmin one), but I don't understand how it can work one minute and then go crazy the next. When they work they are great; when they throw a funny turn, they are annoying and ruin the rhythm of the run. Anyway I decided to give up on the heart monitor for this short 45 minute run and just ran slowly - around 7:45 min/km. I've decided not to beat myself up anymore about my lack of fitness, and just accept it for what it is and try to regain it over the next couple of weeks.

So Sunday came and the Long Run! 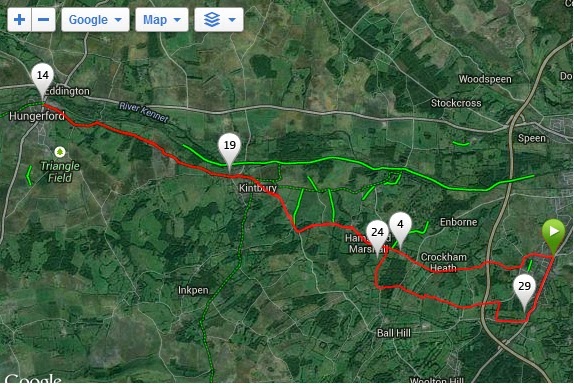 My last long run before the illness (the one where I almost froze my hand off) was a 26 km run. My training plan calls for increments of 10% every 2 weeks. However I have been ill so wasn't able to run the next scheduled increment of 28.60 km. Being a stubborn bastard, and not want to get too far off track on my training, I decided to keep to the training schedule and make this long run 31.40 km (a 20% increase on my last long run). This would be the farthest I've ever run.I decided to pick a different route this time and calculated that running from Wash Common (where I live) to Hungerford and back would take me to around 31k. I was joined on this run by a fellow Newbury Runner, Robin Killingsworth. Now I'd warned Robin about my ridiculously slow pace and also the ridiculous time I'd be starting the run (5:45am on a Sunday!). He was up for it. Originally the plan was to run out along country roads and then run back along the Avon & Kennet Canal. However the canal is flooded in places, so it was going to be a simple there and back.

We set off at the scheduled start time and feeling potentially embarrassed by the slow pace I usually run, I decided for this run to up the pace slightly. My Long Run is usually Zone 2 (139 bpm) on the flat and Zone 3 (155 bpm) on the hills. I decided today to run between 155 - 165 bpm, which would hopefully allow me to increase the pace a little.

This worked out well. We chatted constantly throughout the run (3 hours 31 minutes of chatting!). Before we know it we'd hit Kintbury (around 9km) and then, within a flash of an eye (well, not quite but you know what I mean) we were descending into the centre of Hungerford and the main high street. We got there in around 1hr 33 mins. We took a couple of minutes break whilst I took a gel then headed back.

The route back seemed to involve more hills and I was careful to slow right down as soon as my HR started to approach the 170 bpm mark. Robin was running well, although he was suffering a little with his knee (I know the feeling!). For the last 7 km we took a different route back to the starting point. This was a hilly route that I'd run many times before but in the opposite direction. I posted on Facebook that the last 5 km was hilly, but having looked at the route on Garmin Connect, I can now confirm it was the last 7 km. The hills meats my HR would steadily increase to the 170 bpm mark - when it did, I walked for a minute or so until it came back under 160 bpm and then continued. 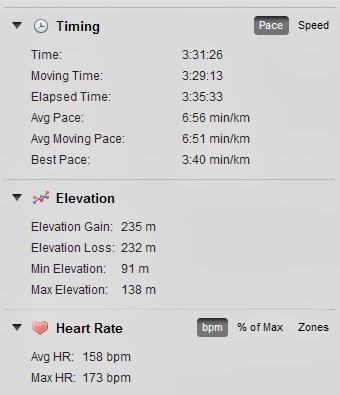 We made our way through Wash Water and past the Woodpecker pub. This was the start of the last hill - from Wash Water to Wash Common up Andover Road. It's a steep hill with a real "kicker" towards the top. Not wanting the HR to exceed 170 bpm I decided to walk a little of hill. When we got to the top it was then a pancake flat straight for 1 km and to the finish. I decided to use this last km to slow the pace right down and use it as a cool down.  Originally I'd wanted to cover 31.40 km as this is what my plan was telling me to do, but as my house was coming up I decided to stop. We'd covered 30.53 km. For the first time this week I was a happy bunny!

This has been a frustrating week for me, but as many of my friends have told me, this is my first week back and it will take time to recover from the illness. Despite this I managed to cover 70.42 km - now that's not too bad!

My knees are a little sore after the Long Run, but I think that is partly down to the trainers. My road runners have covered well over 600 miles, so I'm looking to replace them this week.

I want to thank Robin for the run today. It was good to run with someone and someone who didn't mind going slow. Chatting also made the time fly.

Next week I'm back to my full training plan, starting on Tuesday with a Progressive Run (which should be interesting!). In the meantime, I will have a well deserved rest day tomorrow (Monday).