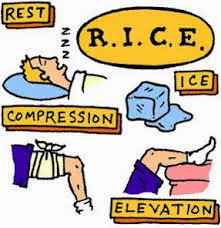 I'm quite sure how to start this blog. I've tried several times and failed. Tried several times to think of a positive, and on each occasion failed. My failure to complete this blog entry earlier is almost (but not quite) as bad as the feeling of failure I have at the moment. A huge disappointment...

It all started to go down hill the week before the run when I twinged my left hamstring. I just knew that would be a limiting factor, but not as much as the tendons in my right foot. They have a nasty habit of flaring up when running off road for significant periods of time. These two concerns filled me with dread even before I started.

Caroline Smallman agreed to run with me to Pewsey (38km mark) where upon she would leave the canal and catch the high-speed train back to Newbury whilst I continued towards Devizes (57km mark). That was the plan anyway....

We met at the Monument in Wash Common at 5:30am on the Saturday and set off towards the canal in the dark. I'd strapped my hamstring up and it felt okay to start with, although I did mention to Caroline whilst running towards the canal that it was unlikely I'd make the whole run. We chatted away and before long we hit the very dark and very silent canal.

We gently ran towards the first checkpoint (not really a check point, but in my head I'd marked specific locations as places to reach) of Kintbury (10km mark). I was looking to keep the pace slow for two reasons: 1) I figured I had quite a bit of running to do that day and didn't want to blow up; 2) Caroline was training for her first marathon in 3 weeks, so I didn't want her to run off too quick. It needed to be a nice gentle "chat pace". That is precisely what we stuck to although I noticed my heart rate was particularly high (averaging between 160-175 bpm). That was crazy and I couldn't bring it down. Not sure if the HR monitor was playing up, but it didn't change for the duration of the run (much to my frustration!).

We ran past Kintbury and the morning light started to appear. I knew it would rain at some point; it was just a matter of when. So there we were, running along the towpath chatting away whilst music flew out of Caroline's rear via her iPhone. Said hello to a few people along the canal and then we hit Hungerford (15km mark). After briefly stopping to chat to a guy and his kids who'd dropped their Royal Mail parcel reminder in the canal we then continued on. It was on this next stretch that I could start to feel the top of my left thigh hurt a little. I'd strapped the leg up to deal with the hamstring and to be honest the whole upper leg was starting to feel like someone had punch me. Not a sharp pain; just a continued dull ache. Each time we reached a slight slope (i.e., going up the side of a lock) I'd walk as oppose to running up the incline with a dodgy hamstring. This seemed to help the hamstring. My HR was still high and I'd given up all hope of bringing it down. I did a 30 mile run last month and averaged 148 bpm; I'm now running along the same route at a slightly slower pace and my HR is sky high. As a I say, not sure if it's the HR monitor or not.

Caroline was flying.... she looked really comfortable with the run and it was really nice to chat to someone whilst running a long distance. We reached Great Bedwyn whereupon Caroline topped up her water. The next stop was Crofton Pumping Station (26km mark). I topped up my water and electrolyte and eat a rather disgusting High5 bar. Took one bite and binned it. At this stage our pace was quite slow and that was my fault and I was deliberately trying to slow us down.

We set off again and then the rain started to come. As we plodded on my left leg was still aching but it was my right foot that was starting to bug me. Even with the tendons inflamed I can still run; the real pain usually comes after the run when I can't walk for a number of days. I could feel the tendons start to become irritated and I just knew I was going to be in pain for a few days. I can run 70-80 miles in a single week without any issues; but as soon as I go off road for a significant period of time the problems start to arise.

We continued along the canal until we reached Pewsey (38km mark). The towpath was starting to become muddy in sections and in my head I figured there was no way I was running back from Devizes with such a dodgy right foot. When we reached Pewsey I needed to make a decision to either continue to Devizes or head home with Caroline. In my head I was sure there was a train station in Devizes but couldn't remember, and my phone signal was so bad that I couldn't check. I all I know was that Devizes was pretty much an additional half marathon distance away. Having stopped for a  little while to check the phone, I could feel my right foot even more. I discussed it with Caroline and decided that this was only a training run and so decided to stop and get the train back. We ran to the train station and I was somewhat gutted and disappointed in myself. I really wanted to run further; I'd trained for it. Yet another failed run.....

When we got to the train station we saw that the next train wasn't for 3 hours! We were wet and cold by this point so tried to find a bus or taxi to take us back to Bedwyn so we could get a local train home. No such luck. We were in a Dead Zone! Having got a coffee in a local Spar, Caroline called her partner (Lee) who very kindly came to pick us up.

On the way back in the car, whilst chatting to her son, I was also going through the run in my head. I was so pissed off with myself. Why I attempt these kind of runs I don't know. I set myself targets and fail in achieving them. I hated myself and more especially my right foot!!! If I'd been running along a road I would have gotten much further. I really did feel like a failed runner.

We got back to Newbury and I left Caroline and her family and headed home; totally dejected! The next day, as night follows day, I couldn't walk! Tendons in my right foot were inflamed and I couldn't put any weight on it. It was like that for at least 2 days, and it really hurt.

In hindsight I'm glad I stopped when I did for a number of reasons: I would have felt shit if I'd continued running then found out later than Caroline had been stranded on her own; a day later I found out there is no train station in Devizes!

This latter point I've been thinking about much. With no train station in Devizes I would have had to have made one of two choices: call my wife to pick me up (not a good idea!); run back. I suspect knowing my stubbornness I would have run back through the pain. And this is the point - and more so with ultra running. I only seem to push myself when I have no choice but to do so. I would have run back and hit my target, despite the pain.

So there we have it: another long run attempted and another failed run achieved, and all because of injuries. I've learnt my lesson though. I have the Stort30 lined up at the end of the month, but I've decided to pull out of that. I'm not prepared to run along another canal again until my right foot is fully healed.

That means my long-distance running is now over...and over for quite a while. My wife is giving birth to our second in December, so for the bulk of 2015 I'll be busy with that. I'll try and get some runs in to keep fit, but it's unlikely I'll be doing any long-distance running. Hopefully this will allow my right foot to fully heel.

That also means the end is near for this blog page, since I mainly use it to track my training and events.

I hope Caroline nails that marathon - I'm quite sure she will....
Posted by Unknown at 04:36